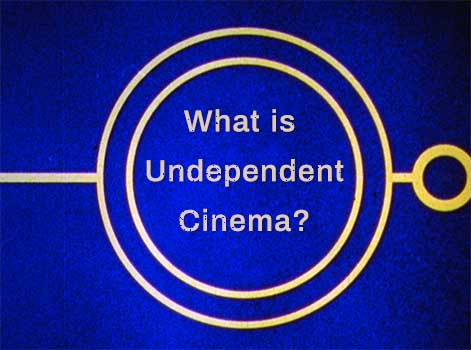 To understand what's meant by "Undependent Cinema" it's helpful to look at three basic categories of non-documentary filmmaking:

Group (a) - Hollywood, Mainstream Feature
A film around 90 minutes long that is based on a scripted, narrative plot and is produced with largescale funding and released through major distribution chains with the intention of producing a profit for the film's investors. Quite often these films also serve as vehicles for product advertising and tie-ins related to other forms of commodification. These films are produced by an industry analogous to the way Boeing produces airplanes. This group also includes the foreign films that likewise follow the Hollywood Industrial model.

Group (b) -Independent
A film usually based on a scripted, narrative plot that is produced with small, though substantial, funding from friends, family and investors. With some exceptions, the general goal of these films is to be submitted to festivals with the hope of getting "picked up" or at least firmly noticed by group (a). Often the longterm implicit goal of these films is to provide the director, producer and/or actors entrance into group (a). Since these films usually require budgets considerably larger than the total-yearly-income of any average person, there is definite ambiguity as to just what these films are "independent" from.

Group (c) - Undependent, Avant-guard, Experimental, Lo-fi
A film produced as an artistic expression that does not necessarily follow a scripted, narrative plot structure. Funding sources for these low/no budget films range from the individual filmmaker's pocket to arts grants and patrons. This group is treated as a minor offshoot in the mainstream's annals of filmmaking history. When in reality, this catchall category includes the widest variety and quality of films ever produced. For example, this category covers many first films by aspiring filmmakers as well as movies by artists such as Marcel Duchamp, Man Ray, Maya Dern, Stan Brakhage, and Andy Wharhol. The goal of the undependent filmmaker is to make better films, not to enter into the Hollywood Industrial Complex.

Though considered mainstream, there is nothing normal to filmmaking about the standard, large-budget, plot-driven filmstyle. Certainly it can lead to impressive results, but the process is an incredible filmmaking contrivance that requires a great deal of method and manipulation. Nevertheless, this single style is propagated as the only definition of "normal" filmmaking. As such, any aspirant to this sort of filmmaking is expected to chase boring, unstable, low-paying jobs in the industry that have little or nothing to do with the nuts and bolts reality of filmmaking. Real filmmaking tasks - such as shooting, directing and editing - are divided-up by the industry and then offered only to those who have endured this system for years or graduated from expensive filmschools or are otherwise properly connected.

Undependent filmmakers dispense with the myopic view that filmmaking should only proceed through the script-it, pitch-it, fund-it, cast-it, shoot-it model. Instead, they follow the load-the-camera and turn-it-on system. This aesthetic has the effect of teaching the basic principles of filmmaking immediately. As soon as the novice undependent filmmaker begins working he/she engages all of the major components of filmmaking - e.g. content, lighting, camera placement, framing, movement, focus, film-processing, editing and projection. By completing the entire filmmaking process from beginning to end, the undependent filmmaker rapidly discovers the true language of cinema. Afterall, cinema's not words on paper nor pitches for funding, it's the fluid rhythms and textures of moving images juxtaposed with sound. As with any language, fluency comes fastest to he/she who is totally immersed not through subdivision and partition.

The undependent path is the most direct form of filmmaking, and as such it is the steepest. From setting the wrong exposure to miss-cutting the original print, the possible pitfalls are many. But with practice comes understanding, and with understanding can come mastery. Thus the stakes are high and the rewards great for the patient, dedicated filmmaker who chooses the way of undependent cinema.

"If I were to wish for anything, I should not wish for wealth and power, but for the passionate sense of the potential, for the eye which, ever young and ardent, sees the possible."
- Soren Kierkegaard